Review: Crisis VRigade vs. Time Crisis 5 - Is the Oculus Quest 2 more fun than an arcade game?

Time Crisis is one of the most recognizable arcade shooters of all time. Can Crisis VRigade on the Oculus Quest 2 keep up? 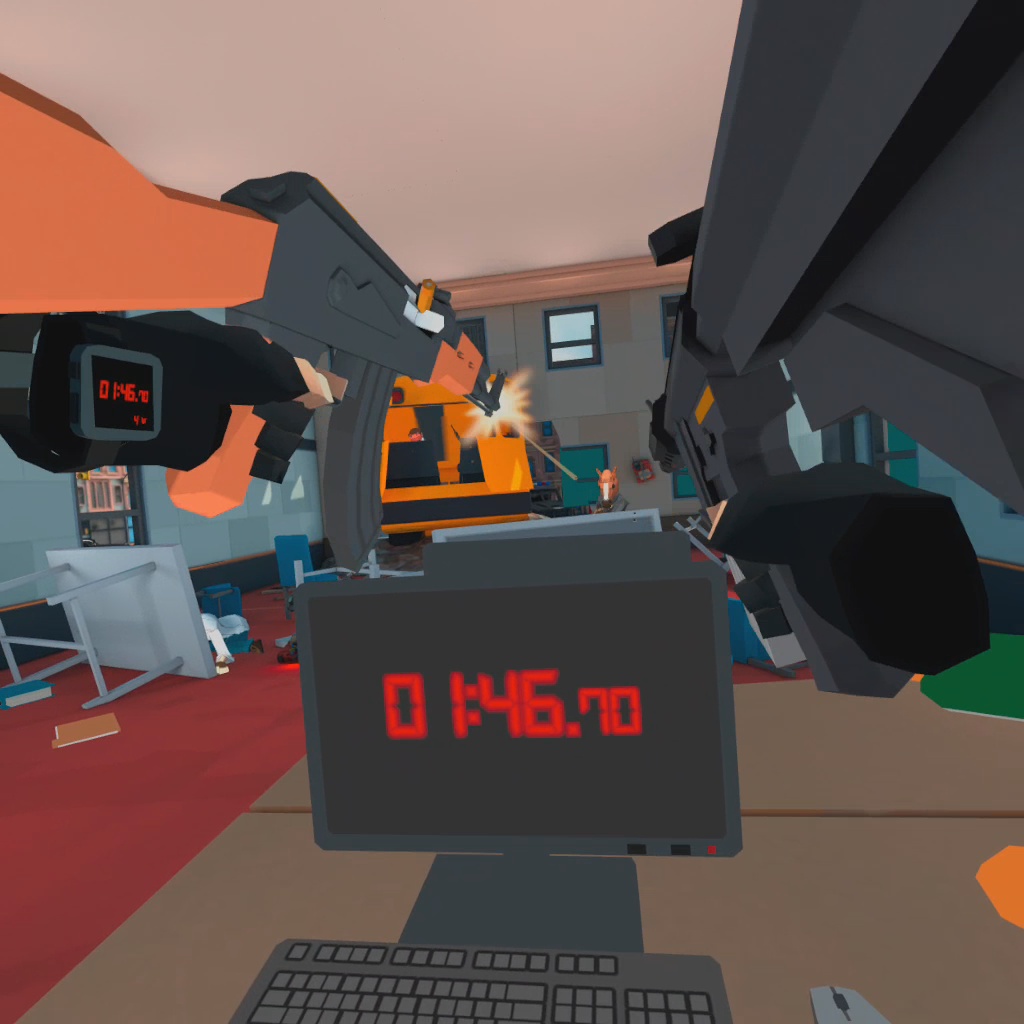 Before the Rona times, I’d take trips to the arcade three times a week. When I heard that Crisis VRigade is a nod to one of the most iconic arcade shooters of all time, the Time Crisis series, I had to see if it really lives up to the Time Crisis legacy.

‍
Now that I’m vaccinated and California is slowly opening back up, I went back down to my local Round 1 arcade and ran through most of the stages on Time Crisis 5 (2015) to see how it compares to its VR counterpart.

Are VR games really the future? How does the cost of each game compare to their fun factor? Is Crisis VRigade worth the pickup?

As the LIV blog’s self-appointed arcade expert, and in the interest of pressing and hard-hitting journalism, I had to investigate.

Meanwhile, the price to play Time Crisis 5 varies depending on the arcade you go to. It’s most commonly found here in California at Round 1s or Dave and Busters.

Also, since Time Crisis 5 relies on the standard 3 lives per swipe system, you’ll have to pay more if you’re dying a lot.

With all my membership benefits using a Round 1 Platinum Membership card, 3 lives of Time Crisis 5 cost me about 82 cents (Cost per credit 0.133 x 6.2 credits per play). If you’re an absolute mad lad, you can make it through the entire game with only 3 lives, but it’s likely you’ll make mistakes and need an extra swipe per stage, and there are 6 stages in total.

If we set aside Round 1’s Platinum Membership bonuses and Dave and Buster’s half cost arcade games on Wednesdays, 3 lives on Time Crisis 5 run you about $1.55.

That means you can run through Time Crisis 5 once with 12 lives for about the same cost as owning Crisis VRigade on the Quest 2. 12 lives can get you through the entire story of Time Crisis 5 if you’re very skilled at arcade shooters, but most people won’t make it all the way through.

‍The length of Crisis VRigade depends heavily on how many tries it takes for you to clear a level. The first bank heist mission gives you about 7 minutes to clear it, but you likely won’t be able to do that on your first, second, or third try. I’d say it took me about an hour to clear on the easier of the two difficulties just one of three of Crisis VRigade’s missions.

‍
Time Crisis 5 is much shorter, clocking in at about 25 minutes, but that’s all unique content that you are not repeating. Failure doesn’t set you back in the mission, it just sets you back some arcade credits.

‍Crisis VRigade released half a decade after Time Crisis 5 did, so you’d think that with the advantages of virtual reality, they would take the easy win in the gameplay category.

However, I think that Time Crisis 5, developed by BANDAI NAMCO, easily takes the win with their decades of experience making shooters and arcade content.

If it weren’t for the title, I don’t think many people would draw a similarity between these two arcade shooters. Crisis VRigade feels like a basic VR wave shooter that we’ve seen far too many times since 2016.

I will give Crisis VRigade some points for ease of play. A VR noob could easily pick this game up and have an absolute blast, but in a landscape where other incredible co-op player-versus-environment shooters exist, like Raw Data or Onward’s co-op mode, I feel like Crisis VRigade is lacking, even for its price tag.

Each scene in the bank heist mission is basically the same; shoot all the enemies to move on. There are some neat environmental elements to the game, like shooting down a hanging platform to squash some enemies, but the entire scene lacks the variety in pacing and missions that Time Crisis 5 has.

Time Crisis 5 features quick time events, like shooting critical points on an enemy as fast as possible in slow motion, or a sniping section that breaks up the monotony of laying down a string of pistol fire. In Crisis VRigade, you just put shots down range the entire time.

Time Crisis 5’s big selling point is something that Crisis VRigade sorely lacks, and that’s the dual pedal system. As you stand in front of the arcade machine, you can use your feet to step on pedals that dash your character around the scene. The entire game is built around it.

For example, there’s a scene where you won’t be able to shoot riot shields from one angle but can easily get their flank by hitting the opposite pedal. Sometimes one of your two angles will be obstructed by smoke or water, and you’ll need to quickly hit your other pedal to continue firing.
‍

‍
Teleporting and dashing have existed in virtual reality since the days of The Lab (2016), and I don’t see why a game inspired by Time Crisis wouldn’t borrow one of the game's most critical gameplay mechanics.

Winner: Time Crisis 5 for its superior pacing and core mechanics.‍

‍I’ll have to admit, I wasn’t even 1-year-old when Time Crisis 1 released. The only other Time Crisis I’ve played to completion is 3, so I’m not super up-to-date on Time Crisis lore.

When referencing the Wiki, it turns out the Time Crisis series has much deeper lore than Crisis VRigade, but both games feature a hilariously absurd storyline.

Mid-game the Crisis VRigade commentator will say things like “Tim is dead, he only had 2 weeks left to retire”, and lay out humorous insults when you fail a mission.

Time Crisis 5’s story is written like a bunch of drunk fratboys wrote a Michael Bay film and got paid per different type of vehicle they included in the script. Throughout the shooter, you'll be fighting (or riding) helicopters, motorcycles, tanks, trains, and gigantic angry laser robots.

‍
In Time Crisis 5 you’re chasing Wild Dog, a bad guy with a briefcase. You want the briefcase. When you finally catch up to him mid-game, his hand holding the briefcase detaches from his arm and flies away. The writers for Time Crisis put away any sense of realism in exchange for pure action and absolute hilarity.

Winner: Tie. No one is playing either game for the story, they’re both absurd but funny. Time Crisis has big cutscenes, so I’d give Time Crisis a slight edge.

‍I absolutely love difficult games. Bloodborne is one of my favorite titles of all time, and the map to Getting Over It has been my phone wallpaper since the game came out.

Time Crisis 5 gets a bit cheesy with its difficulty, obviously in an effort to take your lives so you have to spend more credits. Enemies wearing red are the main enemy you can lose lives to, as they’ll target you directly unless you take them out quickly. Sometimes they’ll appear on the scene and take a shot at you immediately, costing you a life. Unless you memorize their spawns, they can be instant “gotcha’s” that will eat at your credits.

Other than that, you can shoot missiles out of the air to avoid taking damage, release your pedal to get back into cover, or just shoot everyone first and ask questions later. If you’re playing co-op and accidentally shoot your teammate, you just lose score.

There are also environmental hazards, you’ll have to duck under falling debris in the motorcycle stage, and helicopters that can fall out of the sky and hit you if you’re not careful.

Crisis VRigade is difficult too, but I think it’s unfairly so.

Difficulty is a lot of fun in video games if you can identify where you went wrong and improve your run next time. Crisis VRigade seems to have been designed to be difficult for the sake of being difficult.

Enemies fire off into the room you’re in...randomly. If you peek out too long, you’re bound to get hit, but unlike in Time Crisis there’s no way to prioritize targets or shoot enemy projectiles out of the air. It’s like playing SUPERHOT, except there’s 0 telegraphing enemy projectiles or who’s going to hit you.

I ended up playing Crisis VRigade mostly crouching in the floor, only peeking the absolute topside of my head up to semi blindly fire my shots at enemies, adjusting my aim based on the bullet trail. I even adjusted the in-game height to make it a bit easier for me to see over certain objects while crouched.

This is in stark contrast to Time Crisis, where if you were taking too much heat you could flank with the dual pedal system to throw your enemies off and dodge attacks.
‍
I felt like you could skillfully dodge or deflect your enemies in one game, while in the other I was slowly taking out enemies in order as I crept around each corner.

‍
In Crisis VRigade I would sometimes get shot from impossible angles. In many VR games your head is the only thing that can be hit, but in this shooter, your estimated arm and body position is fair game.

‍
Winner: Time Crisis 5, easily. Both games are difficult, but one punishes you for legitimate mistakes while the other just randomly shoots you sometimes.

‍Are these games worth your cash?

‍Time Crisis 5: it’s not my personal favorite game to play at the arcade, but even as a VR enthusiast, there’s still a fun novelty to pointing a gun at a screen and the bullets going towards where I was pointing.

Check it out on half priced games Wednesdays at Dave and Buster, or get an unlimited plays card at Round 1. I spent about $5 playing for 15-ish minutes, and I’d do it again.

Crisis VRigade: At only $5.99, I’d say it was worth every penny but not much more. There are significantly better VR shooters on the Quest 2 for more money (like Sairento VR: Untethered for $19.99). I think this is a cool game to introduce to people to get into VR, but I’m just disappointed it doesn’t live up to the Time Crisis name.

It’s important to note that Crisis VRigade 2 is already out at $19.99. I haven’t tried it yet, but hopefully it solves some of the issues I had with the original.

What do you think of these two arcade based shooters? Which game do you like better? Are there any other games you want me to compare or review? You can join the LIV Discord or Tweet at the LIV Twitter to let us know!